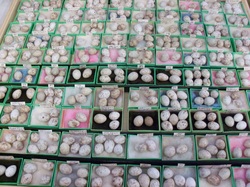 Cuckoos mimic their hosts' eggs, while hosts adopt counter characteristics. As cuckoo and host eggs share the same nest, increased reproductive success of the one may reduce that of the other. Because climatic changes (e.g., warming) affect nesting phenology and food availability they may affect the parasite and the host ability to change egg characteristics. Cuckoos lay smaller eggs than expected given their size as an adaptation to avoid host rejection: small cuckoo eggs are more similar to host eggs and are thus more likely to be accepted. Hosts counter that by changing egg size and colour resulting in an arms race. European cuckoo, Cuculus canorus, commonly parasitizes some bird species while rarely laying eggs in other species’ nests. Parasitizing multiple species requires high mimicking ability and flexibility in the timing of egg lying dates. I ask whether egg and body size of the European cuckoo and its hosts have changed across Europe during the last century. I hypothesize that if egg size is an important factor in the arms race between cuckoos and their hosts, and climate change quickly affects egg sizes, than egg size of the cuckoo and/or its hosts will have changed. I further hypothesize that such evolutionary changes are accelerated in host species and populations that are more commonly being parasitized by cuckoos (e.g., egg size changes in reed warblers will be faster than in garden warblers, and change faster in heavily parasitized populations of the former). I will measure cuckoos and hosts and their eggs at TAFs that hold clutches collected over a period of several decades and compare them to data I acquired from recent field studies. These data will allow, for the first time, to determine whether egg and body size of cuckoos and their hosts co-evolved on a large geographical scale. Using climatic data, I will assess environmental changes in these traits, and estimate whether global warming disrupts the natural evolution of cuckoos and hosts
Powered by